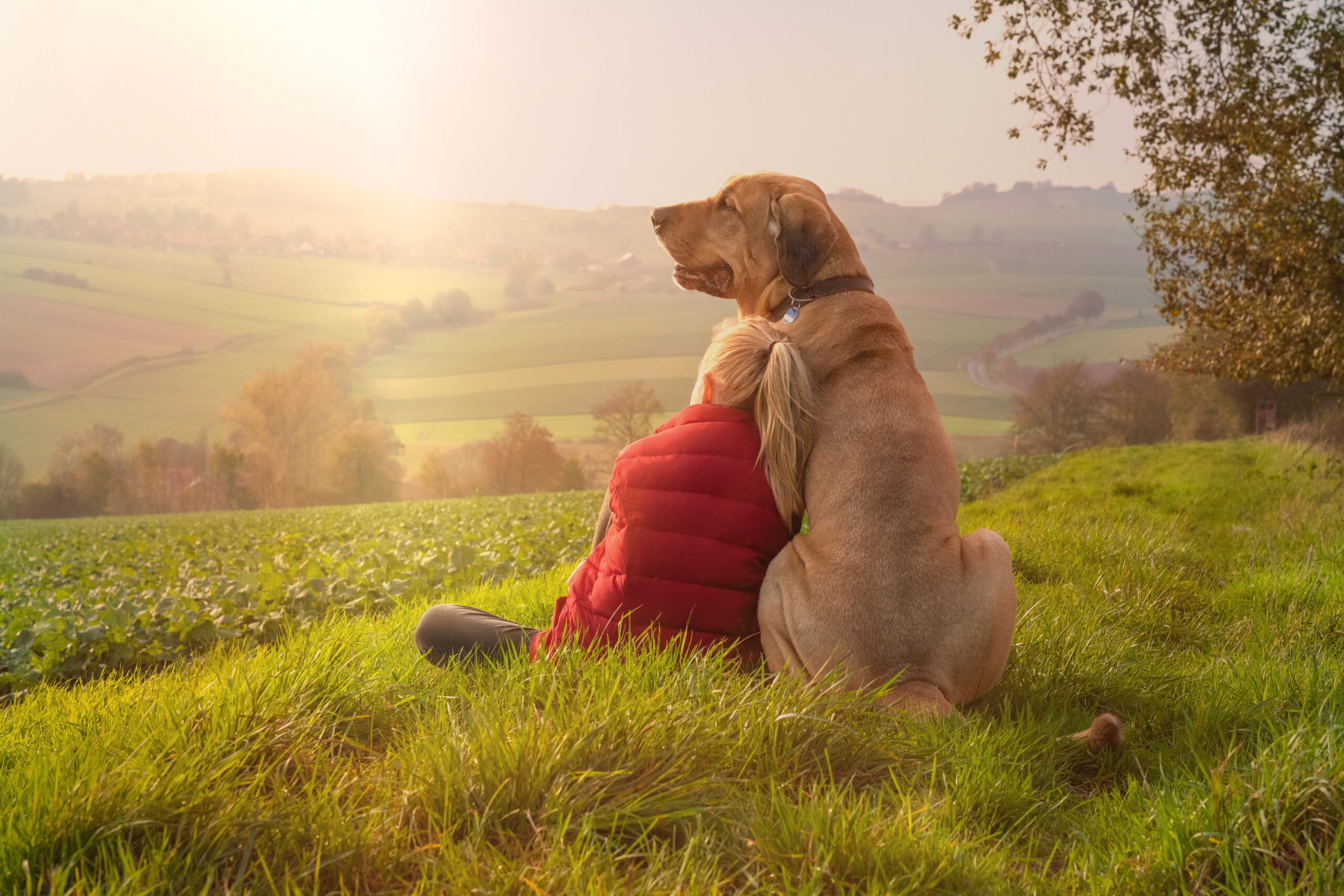 Parasites and your Pooch

With 1 in 4 UK adults counting at least one pet pooch among their family members1 (we’ve no idea what the other three quarters are thinking!), it stands to reason that there’s a special day devoted to our four-legged friends: National Dog Day on August 26th celebrates everything that is wonderful about our canine companions! Every dog is unique, but whether yours adores a wild muddy adventure, or prefers a more leisurely stroll in the sunshine, they are all at risk of meeting a parasite (or several) at some point in their lives. We’re here to talk you through where your pup might stumble across these unpleasant creatures, and how you can help keep them safe!

It’s a gruesome thought, but larvae of the common roundworm, Toxocara canis, are able to pass from Mum to her pups via the placenta, which means that most pups encounter their first parasite before even drawing their first breath! And as a double whammy, the larvae also find their way into her milk, so not only are most pups born with worms already on board, they continue to be infected every time they feed.

But are they really such a big deal? Unfortunately these wriggling pests can cause serious issues for puppies, from vomiting, diarrhoea and a pot belly, through to a life-threatening gut obstruction . And to complete the horrible picture, roundworms can even cause disease in people, too; an extra reason, if you needed one, to keep on top of worm treatment for your pet! 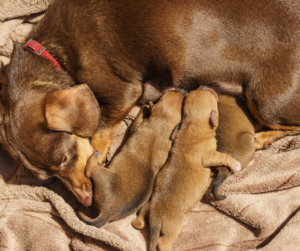 Snuffling around in the great outdoors

Padding along the pavement, woofing at a neighbourhood dog, chasing a squirrel or two and generally having a good snuffle round; it’s what makes the world go round for our four-legged friends! But, in addition to the ongoing threat from roundworms (which your dog can continue to pick up from eating roundworm eggs from the environment), the great outdoors can harbour other hidden threats….

Whipworm eggs, buried in the soil, can be accidentally eaten by an exploring pooch, and once swallowed, develop into adult whipworms inside your pet’s guts. Whipworms  damage the lining of the intestines, and can result in diarrhoea containing blood, especially in puppies infested with high worm numbers.

Hookworms aren’t much fun either; adult hookworms may be small, but these worms have teeth, and bite your pet’s gut wall, creating small ulcers as they feed. Pets become infected by eating miniscule hookworm larvae from the soil, but these wriggling larvae have an even more disturbing side! Not content with waiting to be swallowed, some will burrow into the skin of a passing paw (or even a bare human foot!), causing an intensely itchy skin reaction .

Your pooch can pick up fleas when they’re outside, too; either directly from other animals, or from visiting areas that other pets or wildlife have recently been. Fleas are known for their amazing jumping skills (the cat flea, which is actually the most common flea found on both dogs and cats, has been shown to jump an average height of 13cm2, which also explains why human flea bites  are often at about ankle height!), but once they’ve jumped onto your pooch, they’re quite content to stay put. Fleas live on your dog’s skin and coat, feeding on their blood and laying eggs that fall into your home. This sustained blood feeding can cause pups to become anaemic due to blood loss, and to make matters worse, some dogs are allergic to flea bites, turning a mild irritation into an insanely itchy condition. 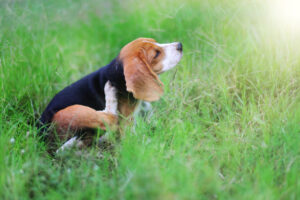 These pesky insects can harbour the larval stages of the tapeworm, Dipylidium caninum, and if your dog swallows a flea through grooming (which they’re likely to be doing more than usual as they try and relieve the itch from these creepy crawlies), an adult tapeworm will take up home inside their guts.  This worm , which can grow up to 70cm inside your dog3 (yep, you read that right!) is made up of segments, which break away from the adult worm and pass out in your pet’s poo. Although the segments aren’t alive, they can still wriggle around for some time, and you might spot them crawling in your four-legged friend’s fur, or in their poo. And if you can read that without shuddering, then you’re made of stronger stuff than we are! 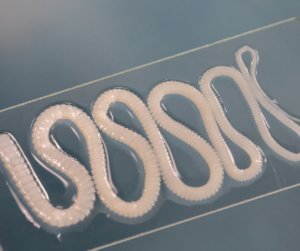 Ticks l oiter in vegetation, and if your dog runs through woods, moors, heathland, long grass (or even just your garden if you have visiting wildlife), they may encounter one of these blood-thirsty creatures! Once a tick has landed on your dog, it will drive its mouthparts into their skin, and stay locked in place for days or even a week or more, growing in size as it feeds on your pet’s blood. The biggest worry when it comes to ticks is that they can transmit diseases (Lyme Disease being the best-known example) to both pets and people, when they feed.  These eight-legged creepy crawlies are found throughout the UK, but some areas are known as prime tick “hot spots”, and extra precautions for both you and your pet are advisable in those locations.

Small  creatures like rodents and birds also play their part in passing worm infestations on to your pet. If your dog happens to catch and eat a small furry creature, that has itself eaten a worm egg, the end result may a be roundworm or tapeworm growing inside your four-legged friend! Eating under-cooked meat is another risk factor, as larger animal like sheep and cattle can also harbour the life stages of some parasites, including both roundworms and tapeworms.

Intestinal worms, flea and ticks are the most common parasites to target our canine pals, but different areas of the country can carry different risks. It’s always a good idea to speak to your vet to find out what parasites are a particular threat in your local area.

If thinking about all of these creepy crawlies is making your head spin, then you’re not alone, but you’ll be pleased to know that protecting your pooch is easier than you might think! Ridaworm tablets kill every type of intestinal worm commonly affecting UK dogs, including roundworms, tapeworms, hookworms and whipworms. They even have a tasty pork flavour, making worming your pet even easier. And banishing the external creepy crawlies is straightforward too; Fipnil Plus is an easy-to-apply spot-on that can be used monthly for ongoing protection against both fleas and ticks.

So whether your four-legged friend is in the mood for adventure, or simply wants to snuggle up with you on the sofa, don’t let parasites get in the way! Regular parasite treatment helps you keep these creepy crawlies at bay, giving you peace of mind you’re doing all you can to protect your whole family. 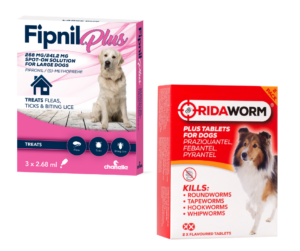 Learn more about our parasite treatment products for dogs here